A diversified property development, investment and management company for over 45 years.

DeGroup are one of Australia's leading family-owned, integrated property groups. The Group specialises in innovative property development, investment and management and our entrepreneurial approach leads the industry both creatively and commercially. We are recognised as industry leaders with a track record built over 45 years.

We are a multi-faceted and diverse business which spans across all areas of property, including residential, commercial, retail, industrial and hospitality assets. Our holistic and diversified portfolio has allowed DeGroup to gain deep experience across the property spectrum and prosper from each individual sector's cyclical nature. The Group is further supported by our Group of Companies which encompasses several operational businesses within the hospitality and parking services industry.
‍
We combine corporate expertise with family values and an overarching commitment to sustainability.

Our integrated property business comprises experienced property executives within each facet the organisation.

We are in our third generation as a family business with expertise passed down through generations.

A committment to sustainability

We develop and own for the long term. We recognise the role we play in facilitating a low carbon economy.

DeGroup is committed to reducing our environmental impact through intelligent building design, investing in renewable energy sources, and driving efficient building operation. Our recent investment in solar is part of DeGroup’s ongoing commitment to reduce our long-term carbon footprint of our asset portfolio. We recognise the role we play in facilitating a low carbon economy and ensuring the smart operation of our assets to limit unnecessary resource use. 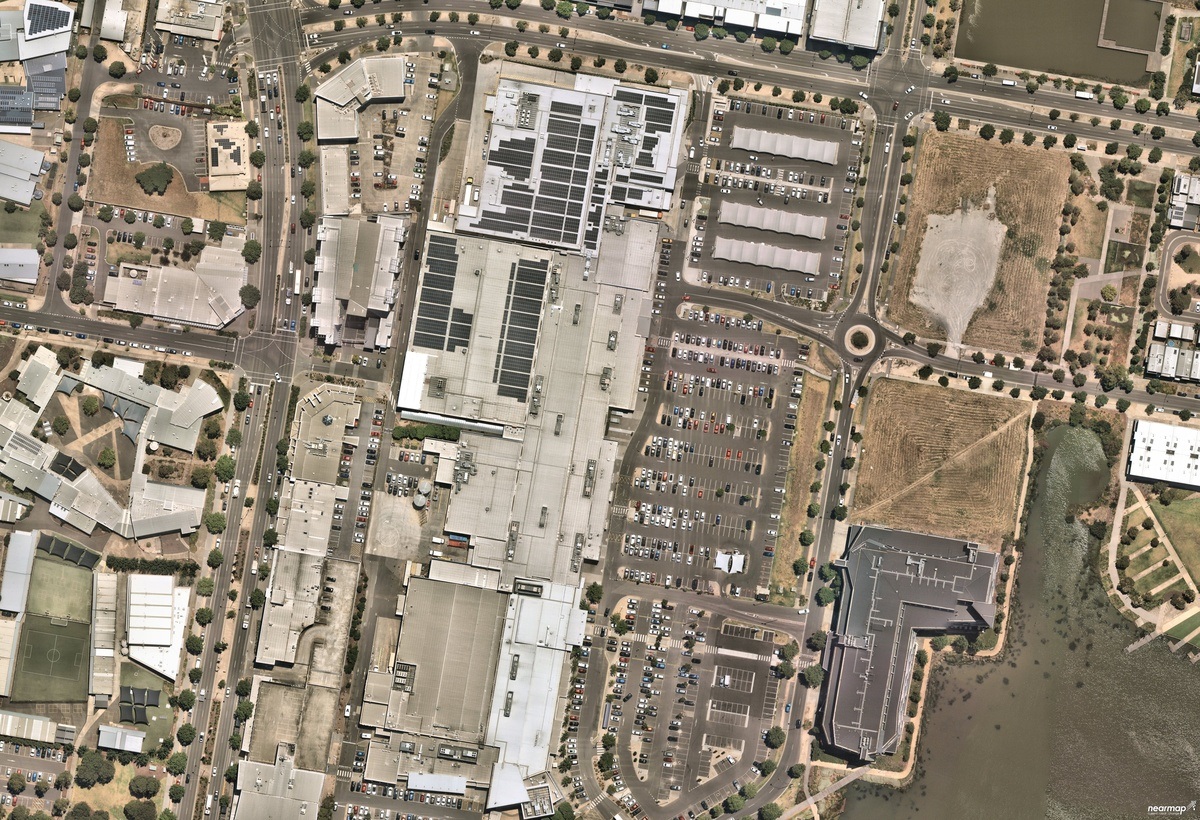 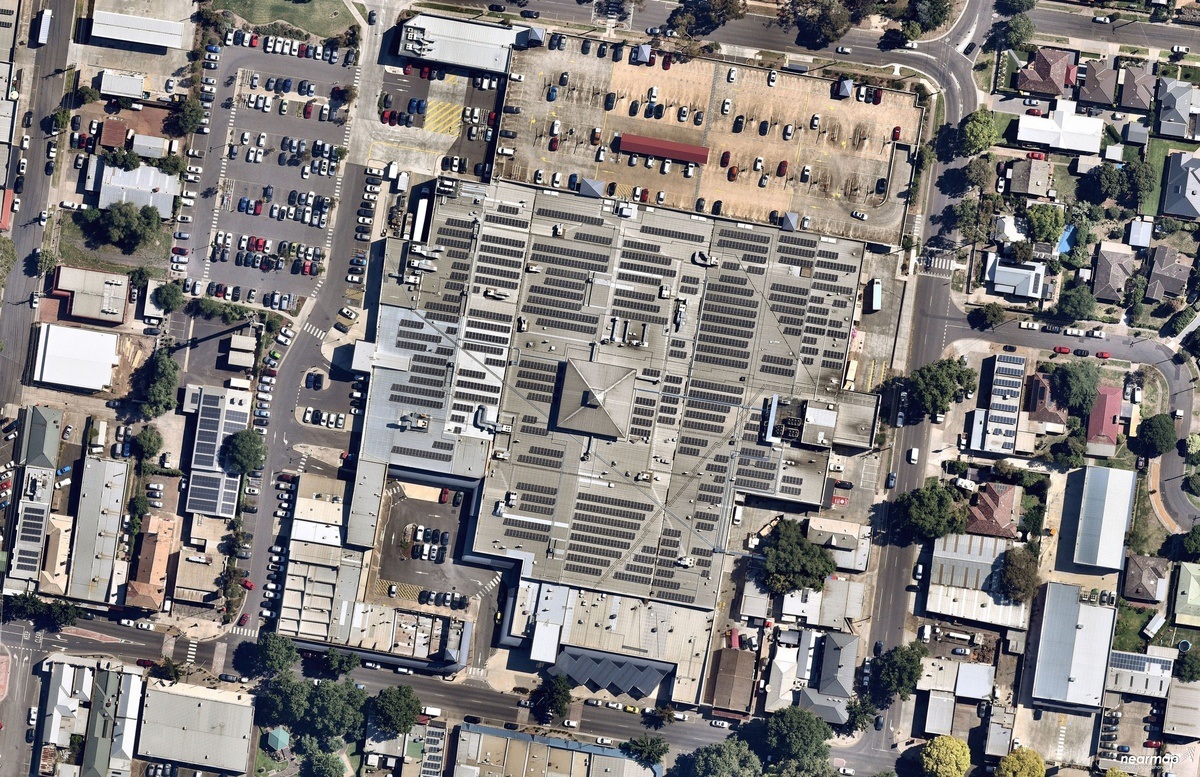 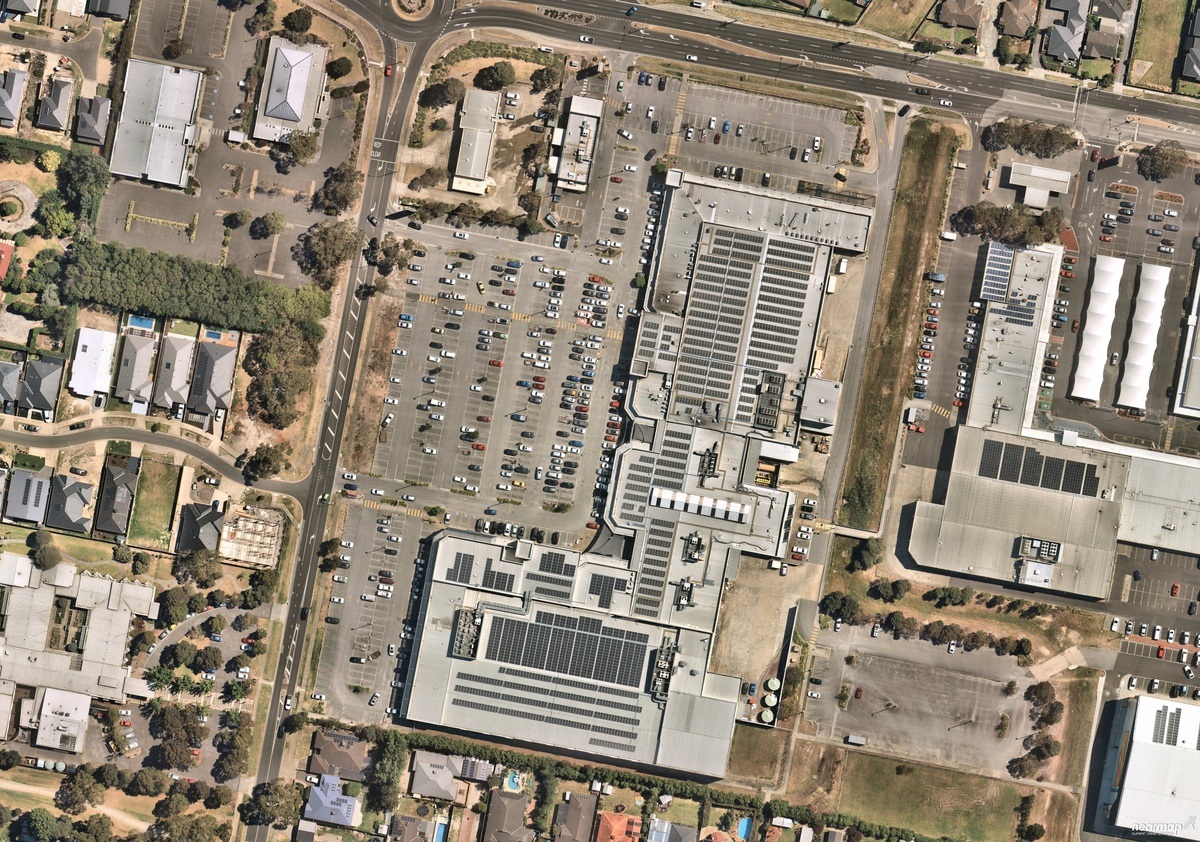 From humble beginnings, Italian born Luigi DeLutis left his hometown of Tocco Di Casuaria, Pescara Italy in 1950 at the age eighteen bound for Australia. Luigi’s wife Anna joined him soon after, immigrating in 1954. Wasting no time, entrepreneurial minded Luigi constructed a shop on the front lawn of his Broadway Reservoir house and operated a milk bar and delicatessen.

Throughout the 1960’s, Luigi continued to work hard and began to develop, buy, and sell various businesses over these initial years in Australia.

EARLY 1970s
Luigi and Anna’s son, Colin, at the age of 14 began promoting rock concerts and dances throughout Melbourne’s suburbs with bands such as ACDC, Sherbert, Billy Thorpe and the Aztecs, Hush, Daddy Cool and Skyhooks. Utilising the savings Colin accumulated from promoting rock concerts, together with the support from his perennially optimistic father, Colin opened the first Westco Jeans store in Smith Street, Collingwood in 1973. Later that year, Colin embarked on a mid-year trip to China during school holidays to source and import jeans in what was an industry first. Although challenging, Colin balanced his final year of secondary schooling at the age of 17 with his rapidly growing retail business.  Within the first five years of operation and whilst at University, Colin continued to grow the business establishing 6 stores by the time he graduated with a Bachelor of Commerce from Royal Melbourne Institute of Technology (RMIT). 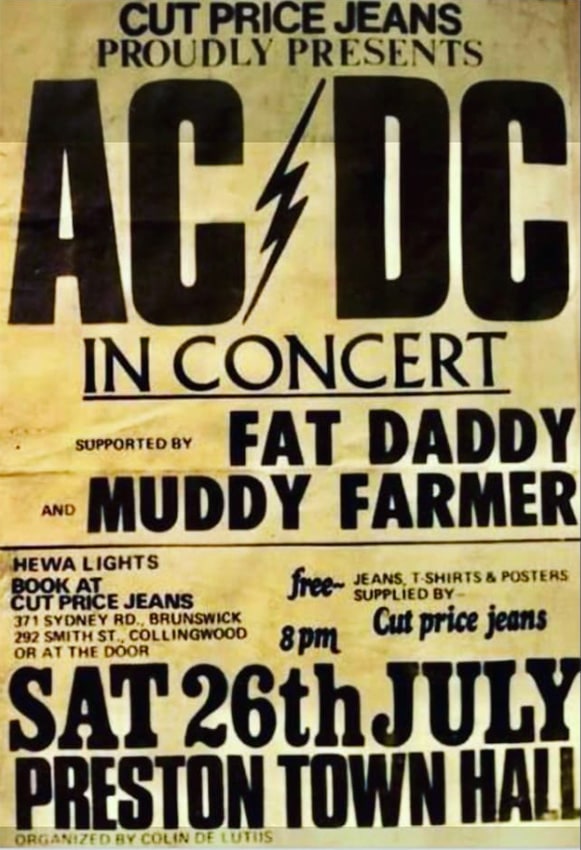 LATE 1970s
DeGroup Pty Ltd was formed in 1977 with the purchase of the group’s first commercial property located at 240-250 Lygon Street, East Brunswick. The Group developed five warehouse facilities at the site shortly after. This provided Westco Jeans the ability to occupy two facilities for manufacturing to keep up with demand. The factories scaled up and produced approximately 300,000 pairs of jeans per year. 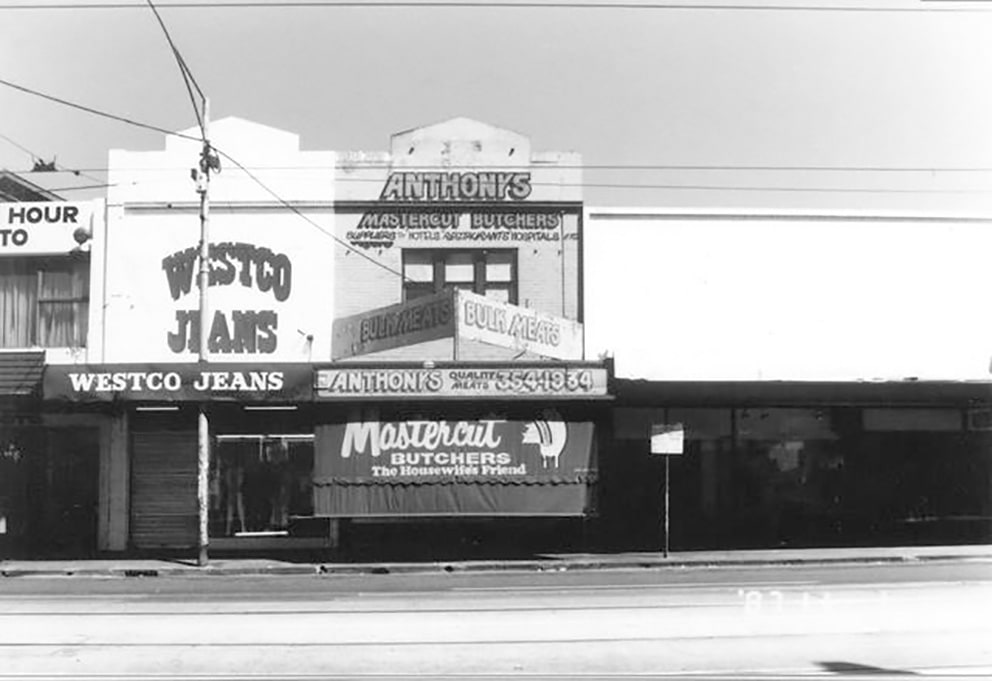 LATE 1980s
In the late 1980’s, the economy of Australia suffered its worst recession since the Great Depression. During these incredibly tough years, the Group reverted to survival mode as many solid companies went under. Property values across Australia plunged over 50%, unemployment skyrocketed to 11% and interest rates rose to more than 20% per annum.  The Group was buoyed by the strength of its retail chain, Westco Jeans and stayed afloat, a little damaged but still intact. 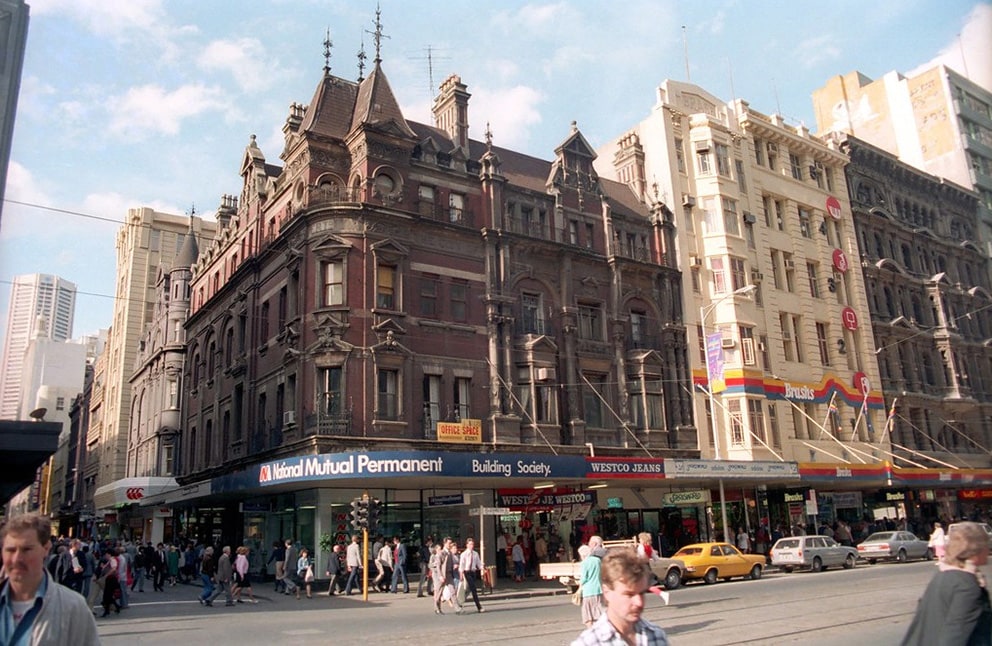 EARLY 1990s
Following the recession, the opportunistic Westco Jeans successfully completed the take-over of the Eastcoast Jeans chain on 77 stores in 1993 taking Westco to 120 stores nationally.   In 1996, DeGroup acquired their first large scale CBD office tower and adjoining 800-bay car park on a rare 2,828 m2 island site. By this time, the Group had built a large portfolio of commercial properties in retail, industrial and offices.

LATE 1990s
The business successfully completed another large takeover of 44 Worths, Thwaittes and Alexanders menswear stores across West Australia and South Australia in 1993 which were subsequently converted to Westco.  By August 1999, the business had expanded to approximately 160 stores nationwide. Later that year, 75% of the Westco Jeans business was divested to Boston-based private equity firm Advent International.

EARLY 2000s
The Group acquired a 20-level commercial office building located at 190 Queen Street, Melbourne which was largely vacant at the time. The building was refurbished, repositioned, and re-leased shortly thereafter.  The Bradmill textile business and freehold in Yarraville was purchased out of receivership from ANZ in 2002. The land was iconic and widely recognised by its historic boiler house and chimney, conveyor and coal hopper and original dye house when crossing the Westgate Freeway. The freehold comprised a 19.6-hectare parcel of land with 580 metres of frontage to Francis Street in Yarraville. Committed to turning the business around, Colin worked tirelessly to stem the loss of money and ensure that all employees received all entitlements once the mill was relocated offshore. In successfully doing so, the Group acquired further adjoining land parcels to the west of approximately 9.8-hectares to amalgamate it to a 29.6-hectare supersite throughout the early 2000s. 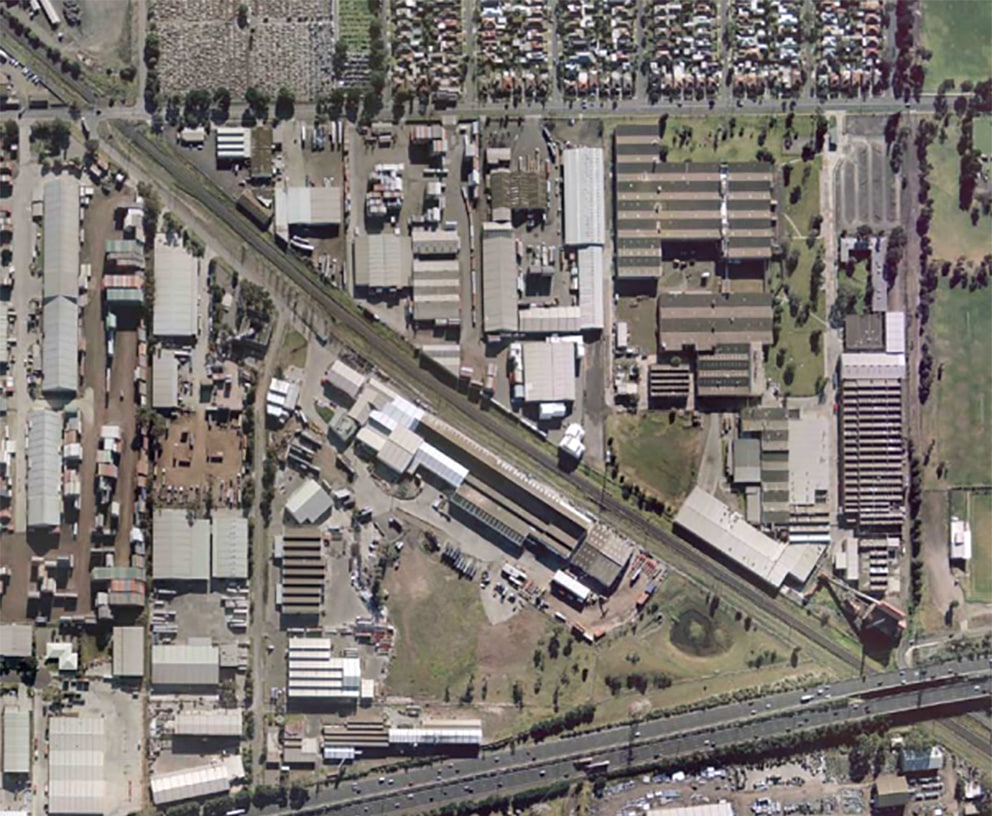 MID 2000s
The Group’s passion and experience in retail was reignited with the purchase of Sanctuary Lakes Shopping Centre in 2004. A neighbourhood shopping centre anchored by Coles and surrounding expansion land located in Point Cook, Victoria. The Group has since completed two extensions in 2012 and 2018 taking the Centre from 7,000m2 to a 20,000m2 Shopping Centre including Coles, Kmart, Aldi and 100 specialty stores. 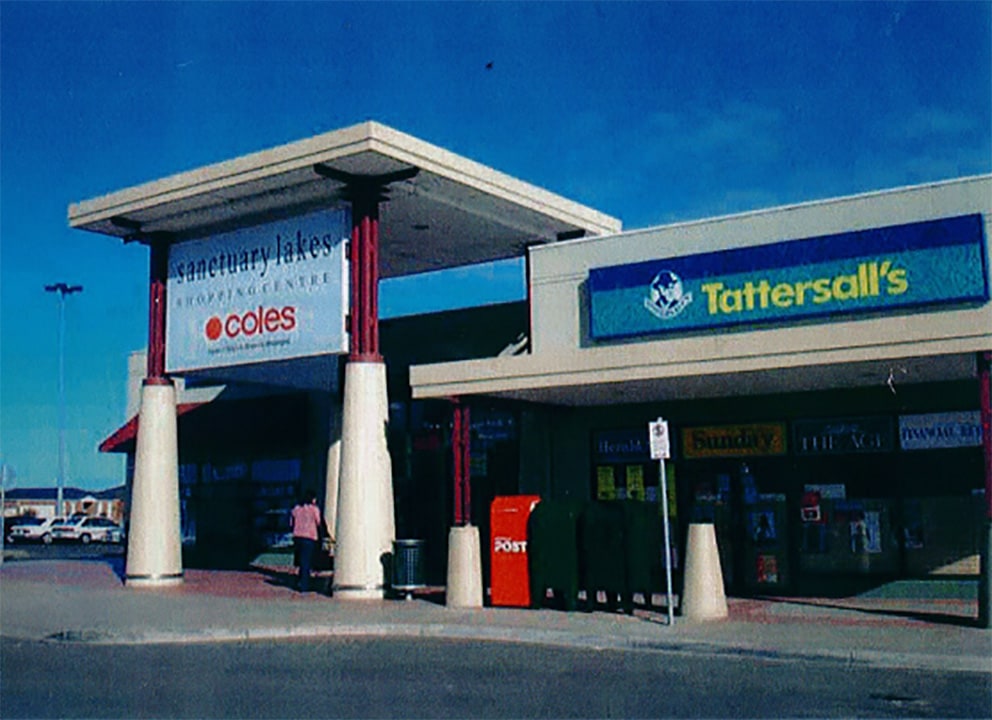 EARLY 2010s
The hard-working family patriarch, Luigi DeLutis, passed away in 2012 at 81 years old. Luigi was instrumental in his wisdom and counsel, always positive and encouraging Colin with his endeavours. Luigi and Colin had a very strong and close bond and Luigi has been profoundly missed by all who had the pleasure of knowing him.  In 2014, the Group purchased Somerville Central Shopping Centre from Federation Limited (formerly Centro), a 16,000m2 neighbourhood centre comprising majors Coles and Target and 45 specialty retailers. DeGroup acquired the 2,601m2 former Mitre 10 site in Ocean Beach Road Sorrento site in 2015. The Group completed the retail development at the site in 2021. The property is now leased to national tenants occupying in excess of 90% of the development on long-term leases. 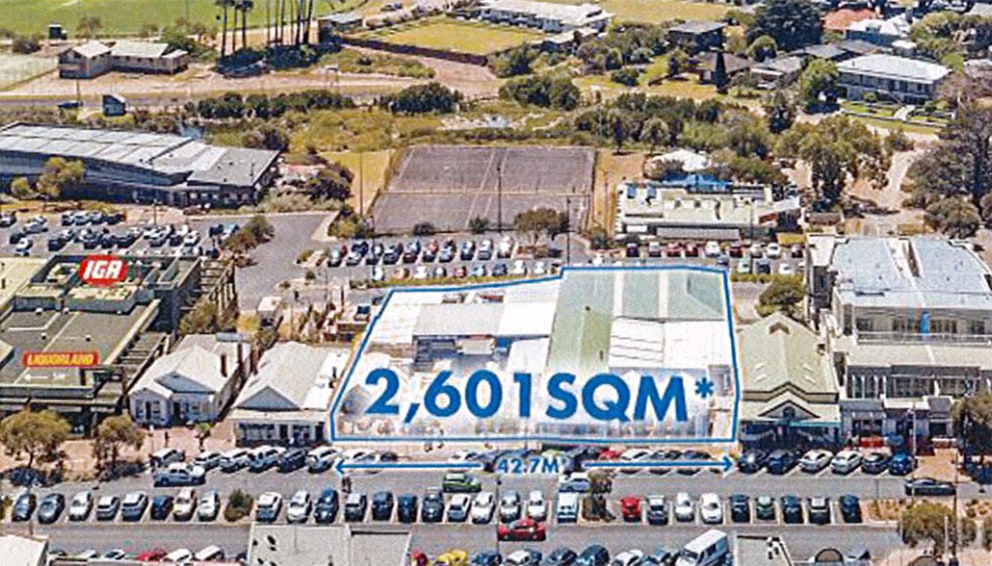 LATE 2010s
The historic Metropolitan Hotel, 263 William Street Melbourne was purchased in 2016 by Colin and Ben. The Group are in the process of undertaking a major redevelopment at the site, which includes revitalisation of the historic pub, an additional floor of trading area and a 20-storey boutique office tower above. Later the following year, the Group divested the 29.6-hectare Bradmill site to international interests.  Colin’s son, Ben, officially joined DeGroup in 2018 after a 4-year period at CBRE in Commercial Valuations and Advisory services following completion of a double bachelor’s degree in Commerce (majoring in Finance) & Property and Real Estate.  The Village Bacchus Marsh was purchased from Abacus Property Group in 2018, a 16,000sqm Shopping Centre with plans afoot for stage 1 extensions. Colin’s daughter, Brittany, joined DeGroup in 2019 as marketing manager after a 3-year period at Accent Group Limited working in the Skechers marketing team. Prior to this, Brittany completed a Bachelor of Business (Marketing) at RMIT.  DeGroup completed the Lygon Place Development in mid-2018 which comprised 8 levels, 96 apartments and 4 retail shops. In the same year, the Group completed their Nicholson House, Abbotsford townhouse development. 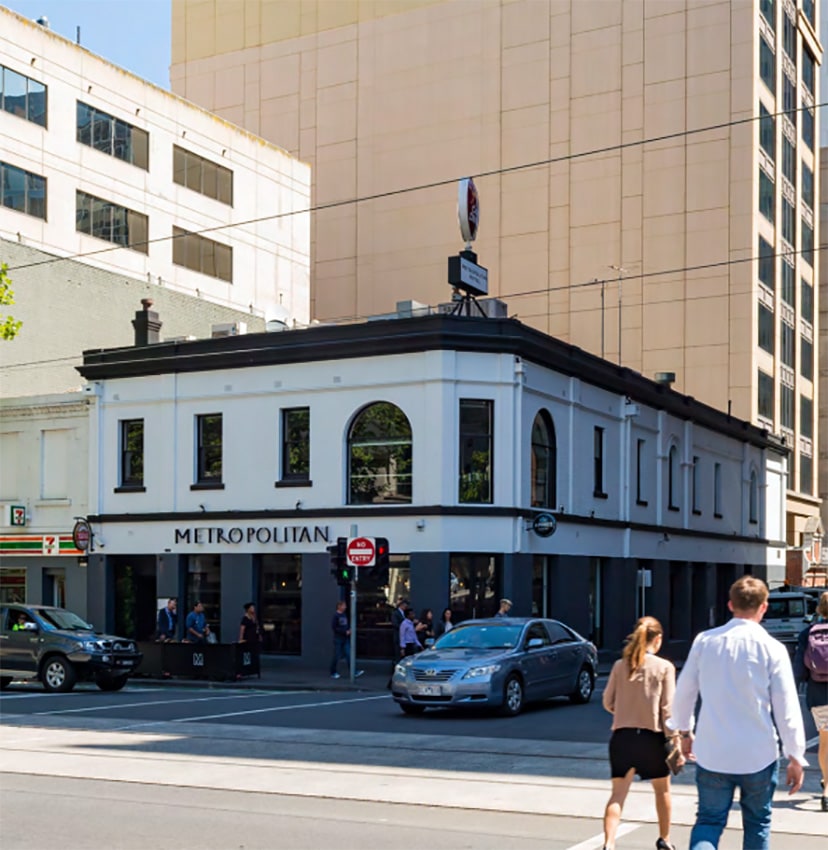 The historic Metropolitan Hotel acquired by DeGroup in 2016

CS Square Shopping Centre, Caroline Springs was purchased from the Lendlease managed Australian Prime Property Fund Retail (APPF Retail) in 2021. A 27,000sqm centre anchored by Coles, Kmart, Woolworths, and Aldi. The Group has 3 stages of extensions planned at CS Square totalling 12,000sqm with construction commencing shortly on Stage 1.  In the same year, freestanding Coles in Woodend was purchased along with the historical Sorrento Athenaeum Theatre and adjoining restaurant. The Group has plans to repurpose and revitalise the asset to retail premises following the Cinema’s intention and notice to vacate the premises.   The Metropolitan Hotel redevelopment in Melbourne CBD commenced construction. 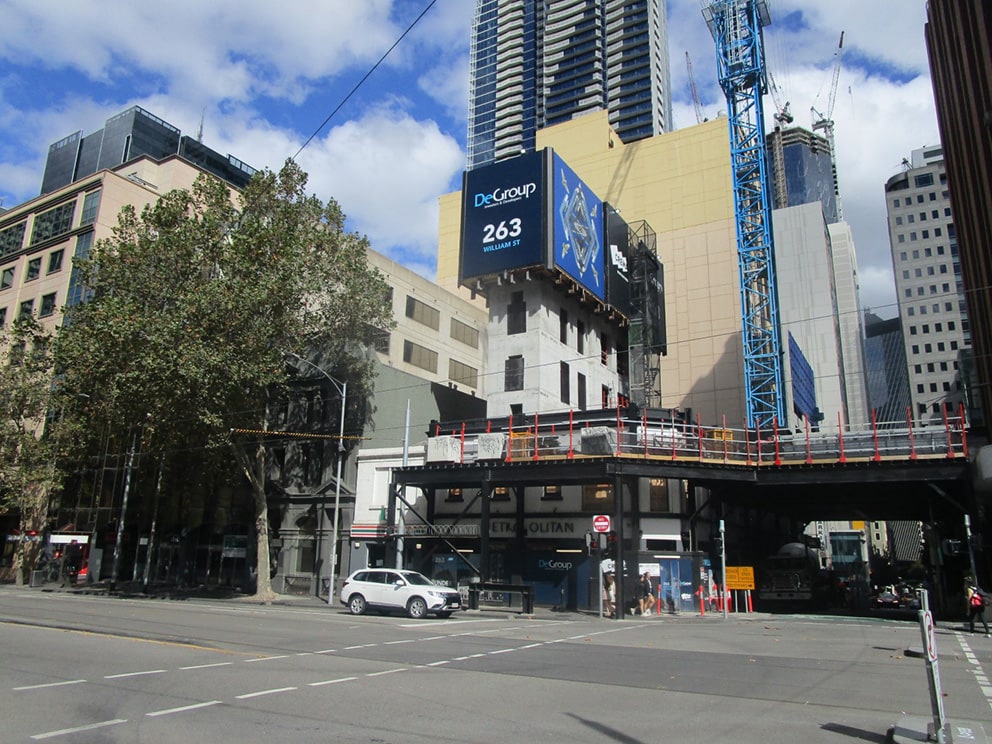 As at early-2022, the Group has an exciting development pipeline of 13 projects ranging from large commercial office towers, residential developments, retail shopping centre expansions and refurbishment and repositioning of existing assets.
Early the following year, the Group completed installation and commissioning of its solar energy system installation across 4 assets in Victoria. Together, the installation of these panels will generate 3,598 megawatts of clean energy each year or the equivalent of 294 homes energy consumption annually. This investment will generate clean power for our shopping centres for the long term, make a positive environmental impact and deliver shared value for our customers and retailers. 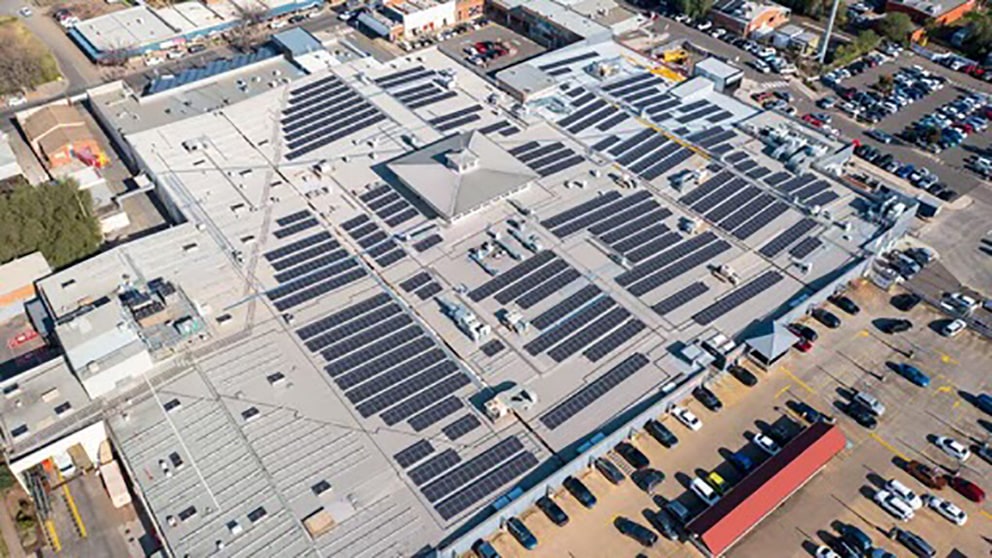 Our Properties by Location